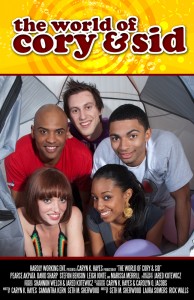 A web series for the slacker in all of us, THE WORLD OF CORY AND SID follows the lives of two best friends, sharing an apartment and living the life. Somewhat an odd couple, Sid (Pearce Akpata) and Cory (David Sharp) are both strangers in a strange land…a world where they’re considered adults.

When Cory, the Brit in our midst, is savagely cut off by his parents, unlike most saps without ingenuity, Cory decides to make his own way…by opening a restaurant in his living room, renting out random portions of his apartment, and various other schemes to put Zach Morris to shame. Cory can scheme his way out of almost anything until it’s revealed that he hasn’t paid his share of rent in months and that he and his roommates will soon be kicked out of their townhouse.

Caught up in the mix is Cory’s best mate, Sid, a Canadian far too levelheaded to risk eviction. Unlike his pal, Sid did his time in the higher educational system and he’s ready to take on the world of business…if only he could wake up before 11:00 AM. It’s often left up to Sid, “the responsible one,” to get them out of the troubles Cory lands them in.

Rounding out the slacker duo is their ragtag group of friends: Cheddar (Stefon Benson) the third roommate, an athlete obsessed with his girlfriend and getting ripped; Devon (Leigh Jonte), a preppy collegiate who wants nothing more than for her boyfriend to move out; and Semaj (Marissa Merrill), a guy’s girl always down for whatever mayhem the boys are looking to create.

Created by Caryn K. Hayes and produced by Hardly Working Entertainment, Cory & Sid can also be seen on KoldcastTV.com.

Pearce grew up in Canada where he studied as a child actor. He put his acting career on hold to attend York University (Toronto) where he played football and studied Public Policy and Management. After graduation, Pearce decided to hang up his cleats and pursue acting again. He studied Meisner at the William Davis Center for Actors (Vancouver). Since then, he has been a student of the Lyric School of Acting (Vancouver), and is working on various Hollywood projects. His recent role as Marcus Fanelli in the short “Every Dawg His Day” was debuted at the 2009 Black San Diego Film festival.

Born in California , David Sharp was raised in Leeds, England. David graduated from the American Academy of Dramatic, Hollywood in 2006. At a young age, David was extensively involved in theatre but has since decided that he belongs on-screen. David’s first short film, “Fun With Lesley,” which he wrote and starred in, won an Accolade Award. Since then he has been featured in several on-screen projects including a commercial with Pau Gasol and recently, his first feature film “END.” David’s English charm and great sense of humor make him a fun guy to have on set.

Originally born and raised in Boston, Massachusetts, Stefon Benson, is the youngest of three brothers and he has one younger sister. A dedicated, sportsman, Stefon played football from the age of eight until college. While attending college as a Finance major, Stefon stumbled into acting when he took a class as a general elective with friends. He fell in love. That same year, Stefon moved to Los Angeles to live on a friend’s couch and pursue his love of performance as a career.

Leigh Jonte began her acting career by starring in summer community theater productions. While studying musical theater in high school and college, Leigh worked on hit shows such as 7th Heaven, the feature film Brooklyn Rules, and student films. She worked under Debbie Allen as the Co-Managing Producer for the 1st – 5th Los Angeles Tap Festivals. After receiving a B.A. in Theater, Leigh immediately began producing fitness DVD, Cuerpaso: The Ultimate Body. Leigh recently finished her run in the Los Angeles stage production of A Sunday Morning Kind of Gal. She will produce the D.C. Tap Festival in April 2009.

Marissa was born and raised in Salinas, California, and began dancing and acting in Community Theatre at the age of two. Some of her favorite roles include Helen Keller in The Western Stage’s production of “The Miracle Worker” at the age of 9, Dorothy in Ariel Theatrical’s production of “The Wizard of Oz,” and Velma in Stevenson School’s Hawaii Tour of “West Side Story.” At the age of 18, Marissa moved to LA to further pursue her acting career and has since acted in various independent works such as the pilot “Men, Interrupted” and the film “The Symphony.”

Caryn K. Hayes Creator/Executive Producer/Director Caryn K. Hayes, a graduate of Xavier University of Louisiana and New Orleans native, received her B.A. in Mass Communications with a minor in Creative Writing, and immediately began pursuing a career in the entertainment industry. She has produced, written and coordinated numerous documentary and corporate videos, short films and commercials. In 2007, Caryn wrote “The Ridge,” a spec teen drama, which won the 2007 TV Pilot Award from the Organization of Black Screenwriters. In the spring of 2008, Caryn produced “Men, Interrupted,” a dramedy pilot, and recently, her short film, “Every Dawg Has His Day” premiered at the 2009 San Diego Black Film Festival.

Shannon has been working in film for 4 years gaining experience in many departments but now coming to enjoy the Assistant Directing and Producing aspect. Originally from Chicago, IL Shannon is now based out of Los Angeles. Shannon thoroughly enjoyed working on Cory and Sid with Caryn and her crew. Shannon is producing several new feature projects now and looks forward to working on the second season of Cory and Sid. Shannon also worked as the series’ Assistant Director.

Having directed approximately 40 plays and films to date, Laura Somers’ award-winning work has been hailed by American Theater Magazine as “hot, hip and on the verge”. Somers is currently in post-production on Love 10:1, a romantic comedy feature directed and written by three women (Somers being the third) about the highs and lows in the search for “The One” for Good Karma Films. She is seeking financing for her feature comedy, Mandoula, a story of Nelson, a terminally commitment phobic forty-year-old who poses as a midwife to earn quick cash. You can learn more about her at www.thesmokingrobots.com

Rick Walls is an award-winning Director, writer and Producer. Recently, he completed a TV pilot: MEN, INTERRUPTED (Producer/Director), being considered by networks, and directed two shorts: comedic feature EVERY DAWG HAS HIS DAY, (2009 San Diego Black Film Festival) and a stylish dramatic film, ANGLE, (2008 BAFTA inaugural short film festival). Latest additions to his directing credits include two episodes of the up coming web series CORY & SID. Rick has directed music videos, TV pilots, national and international commercials. He is considering his next projects; as a freelance Director and in development for his production company, ARGO Entertainment, LLC.