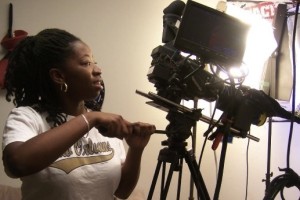 Caryn K. Hayes is an L.A. based writer-producer-director-production coordinator-quality control agent-bartender hailing from New Orleans. She has produced, written, directed, and coordinated numerous web series, documentary and corporate videos, short films and commercials.  In 2007, Caryn wrote “The Ridge,” a spec teen drama, which won the 2007 TV Pilot Award from the Organization of Black Screenwriters, and in 2009 she repeated her win with the adult dramedy, “Dirty Thirties.”  Caryn created “The World of Cory & Sid,” a comedic web series, which was nominated for Best Television or Web Series in 2009 by the Urban Mediamakers Film Festival.  She received an Outstanding Writing in a Drama Series award for her latest web series, Breaking Point, from the 2011 Los Angeles Web Series Festival.  In between her various freelance gigs, she produces sketch comedy with BrevityTV.com, and is currently in pre-production for more episodes of “Breaking Point.  Engaging and fun, Caryn can also mix over 250 drinks and is comfortable with high volume.